The data site of everyone was selected for this year's grand prize of the "Chaso Hissumi-Information Distribution Promotion Fund" announced on November 13, 2017. We would like to report on the award of the very prestigious Hissumi Award, which is more than appreciated by all staff members.
> Winners presentation page

The data site for everyone was launched in 2012, and the citizen and over 30 measurement rooms cooperated to accumulate and release radioactive contamination measurement data since the 2011 Tokyo Electric Power Company Fukushima Daiichi Nuclear Power Plant accident.

In our database, 17,000 food products and nearly 3,500 soil data are accumulated by citizenship, and anyone on the web can search and browse.
As for each food data case, many general people are worried about the health of the child, the data brought into the measurement is accumulated, and each data is valuable. What has come to this form is that it can only be realized by the cooperation with many people.

Also, from 2014, we conducted extensive soil measurements across 17 eastern Japan, under the title of “East Japan soil becquerel measurement project”, collected soil measurements at various locations with over 4,000 people and accumulated data We are working on visualizing the state of pollution.

Soil data, after the Chernobyl accident, in Ukraine and Belarus spent a large amount of national expenses to make large-scale measurement, recorded and released, and used as a judgment standard for evacuation and recreation etc. In most of the cases, only air dose measurements have been made. Also, the standard of 20mSv per year, which is 20 times as high as the value before the nuclear accident, continues to be adopted, and this is currently used to judge the evacuation and return standards of the residents.

Under such circumstances, with the thought that "you should have the right to know the pollution of the area where you live", "If the government does not do it, let's make it clear by itself" We have endeavored to investigate, record and publish “data of We will continue to work to make this data available to many people for use.

This award, together with a large number of people, including citizens who have requested measurement to measuring stations throughout the country, those who have supported us with funds such as collection activities and campaigns, etc. I think that it was received, I want to be happy together. I feel great power in showing the actual situation of radioactive contamination by the power of citizen science by accumulating measurement data. We would like to express our gratitude to everyone in the corner of the Information Sharing Promotion Fund, and encourage us to receive this award so that we can measure and visualize the scars of the nuclear accident and contribute to many more people. Will make further progress. Thank you in advance for everyone's data site. 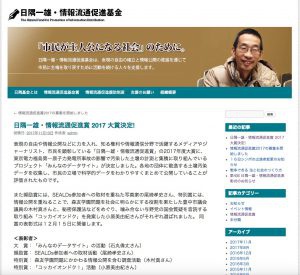