On March 11, a major tsunami hit the Fukushima Daiichi Nuclear Power Plant with the Great East Japan Earthquake, and all power was lost. By the next day, March 12-15, Unit 1, Unit 2, Unit 3, and Unit 4 explode, and huge amount of radioactive materials are widely scattered in the living environment.

Radioactive iodine and radioactive cesium exceeding standards from food and water as well as air dose were detected, and citizens' lives fell into confusion.
Is food for children to eat safe? Can a farmer ship this crop? Each citizen was to face "radioactive material" that he had never known before. Even if you wanted to measure it, it was a measured price of several tens of thousands yen per sample in a private company, and it was difficult for citizens to feel free to measure what they wanted to know. Therefore, "measurement rooms" by citizens began to rise around the country. Measurement of food, space, surroundings such as the soil began by oneself, and it came to perform measurement request from the general public inexpensively.

The idea of wanting to create a system to unify measurement data and display it on a map in an easy-to-understand manner at a research exchange meeting by grantees and applicants related to radioactivity measurement conducted by the Takagi Jinsaburo Citizen Science Foundation It came out. Based on this, the current “Authorized Non-Profit Organization Fukushima 30-Year Project” “Children Mirai Measurement Station” “To Connect to the Future” Tokai Net Citizen Radioactivity Measurement Center (C-Lab) “Jiro Takagi Citizen Science Foundation” The project was launched with a focus on "Let's build a database of citizen's radioactivity measurement room in full scale". In September, we decided to name it as "the data site for everyone", examined the organization's system, and started to study and develop specifications.

We created our own food classification and made it into a database, and at first we built a system for the purpose of being able to register, search and browse data on "food" that most citizens needed at the time. Since the data registered in the database needs to be accurate measurement values, the participating measurement rooms have their own verification system, and a rule has been established that groups that have cleared measurement accuracy can participate. We held a kickoff meeting for the measuring room to show off this first pilot system.

March 2013 Unveiling site for the first time to the public

A "Startup Gathering Meeting" was held to show the public that the database was created. The application of the participating measurement room was also accepted, and the input and publication of the measurement data began in order.

March 2014 Implementation of a wide-range measurement project for food

Conducted a project to measure the trend of “Take noko / Shiitake” extensively.

Since the next thing of food is considered to be soil, we start the concept. Based on the “Soil survey project Iwate” developed independently in Iwate Prefecture from 2012 to 2013, we will measure, record, and map soil as a data site for everyone using a more unified method. is what happened. We will prepare for the study of concrete measurement range, scale and method, financing, standardization of collection method, result input and development of browsing system etc. Recruit measurement rooms to participate in soil measurement projects.

Soil measurement project "kick off meeting" held. Call on citizens to start the project widely. Call for organizing collection workshops in 17 prefectures. Renewal of the website including the soil page. The soil project led to the addition of new measuring rooms, and more than 30.

April-June 2015 Implemented the first round of funding by crowdfunding

Implemented to obtain funds for soil project activities. Achieved 2,100,000 yen. Travel expenses to hold workshops in various places, will be used to cover the measurement costs.

Takagi Jinsaburo Citizen Science Foundation, which was one of the co-representatives, achieved the purpose of launching the project.

Held a briefing session on the East Japan Soil Becquerel Measurement Project. We will report on the actual conditions of radioactive contamination that we have seen from soil collection.

While telling what has been seen from the map, we continue to request soil collection cooperation for the blank area.

2,350,000 yen achieved. Used to advance the collection of blank areas. In addition, we have funds for system development.

By this time, more than 3,000 measurement points have been collected. For areas that are left blank, the Secretariat will collect and measure.

Create maps based on more than 3,000 measurement data. Attenuation correction calculation of the numerical value of the map was carried out, and "the 100 year map" which can predict from the time of 2011 to 100 years later was shown. In search of cooperation of groups facing radiation contamination, 11 groups opened a booth, and more than 160 people including general participants became a meeting place all together. We introduced members of the measuring room of the whole country and did trial sale of paper maps.

Start a project to draw attention to so-called "hot spots" where cesium is concentrated in the environment not by standard soil contamination but by the flow of water, etc.

Renewal aimed at an easy-to-understand website. Participating measurement rooms will be 34 measurement rooms throughout the country. Not only can search and view the measurement results of food and soil projects, but also renews the concept based on the addition of commentary for easy understanding. A page was opened to advance analysis of the data accumulated so far.

It is selected as a grand prize for the Kazuo Hissumi Information Sharing Promotion Award, which emphasizes freedom of expression and information disclosure, media and journalists who are active in the right of knowledge and information communication, and citizens. It is evaluated that the soil of 17 East Japan prefectures polluted by the influence of the TEPCO Fukushima Daiichi Nuclear Power Station is measured and measured over a wide area, accumulated, and scientific data are summarized and presented in an easy-to-understand manner from the standpoint of citizens It was done. 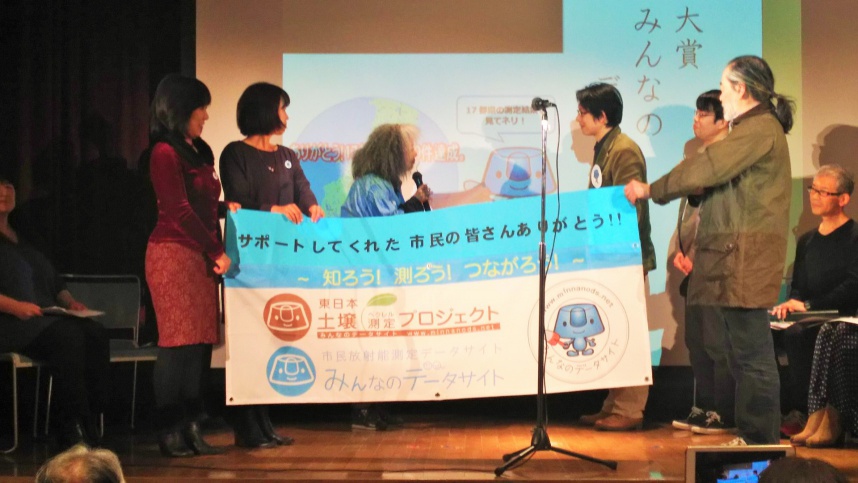 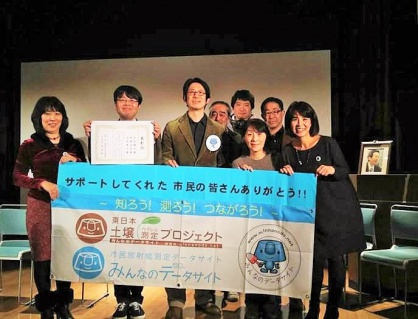 LUSH Charity Bank (subsidy) received support in the global training of LUSH in fiscal 2017, LUSH Summit, the situation after the nuclear accident, the report of the soil project, etc. 1 out of 3 groups from Japan Do as one.

May 4-10, 2018 Exhibited at "Kanagawa and Fukushima is Now" Exhibition @ Kanagawa Prefectural Support Center

Implemented at the crowdfunding site "Motion-Gallery" with a goal of 2.5 million yen for the purpose of procuring expenses for activities such as production costs, printing costs and study sessions after printing. In the end, 2.5 times more than the target amount, support of 6.23 million yen or more gathers.