On November 4th, crowdfunding of collaboration project "environmental enrichment becquerol measurement project" by group called Hotspot Investigators for Truth (abbreviated HIT) and all data sites started! !
Since the “East Japan Soil Becquerel Measurement Project”, which had been implemented so far, was a project to investigate the average pollution in each area, is it not a hot spot survey? We received a lot of voices.
We have been preparing for a project to investigate and release high concentration contamination points, taking out with HIT for over a year.
The system for posting the measurement results was finally developed from July, and it was about to start releasing it, and it was at the stage of asking everyone to formally request support.
The first purpose is to cooperate with local residents at the spot where the hotspot was found, and to negotiate with the local government to request decontamination and cleaning, and the second purpose is to concentrate easily into a hotspot Visualize topography and trends to reduce the risk of exposure.
I would like to support the expenses of about 550,000 yen by 23:59 on the night of Christmas on December 25, thank you! !
Please support this project that will keep you informed of the fact that it will not cause pollution. !
Crowdfunding support and detailed explanation is here https://moon-shot.org/projects/hit (← Click here) 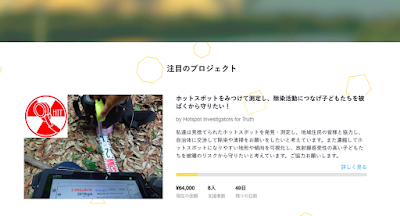 * Please also check out the page of the Environmental Concentrated Becquerel Measurement Project that is currently available.
https://minnanods.net/soil#soil-top-hotspot12-head (← click here) 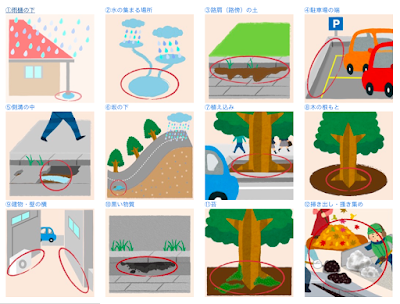 Please call on the people around you, and please expand the circle of support. Thank you in advance.
We would like to inform you of the content to be reported at the soil project report meeting held on November 19 (Sun).

In the soil project, we conducted soil collection and measurement of over 3,000 points in 17 eastern Japan prefectures with citizens. By analyzing the measurement results and trying to match it with the terrain etc., we will tell you ahead of time what you have seen etc. to everyone.
This time, we will analyze in advance two parts of Tochigi Prefecture, which is one of the priority areas for pollution, and Yamagata Prefecture, which has a relatively low level of pollution, and make it an interim report at this point.

Out of 3300 points in 17 prefectures, we conducted a soil survey at 292 points in Tochigi prefecture where the high concentration was polluted and analyzed it. In Nasu town, it exceeded 23000 Bq / kg and it is a mandatory zone of migration in the Chernobyl method There is one place. There are 21 migration recommended zones exceeding 8500 Bq / kg in Nasu-machi, Nasu-Shiobara-shi and Yaita-shi, and in addition to these 3 local governments, migration exceeds 2800 Bq / kg in Nikko-shi, Shioya-cho, Otawara-shi and Nakagawa-machi There were 81 rights zones in total. Serious initial exposure is also a concern. However, six and a half years have passed without the government or the local government taking appropriate measures. There is concern about the exposure of the citizens, especially children. Even now, it is necessary to take measures like Fukushima, such as health surveys. " 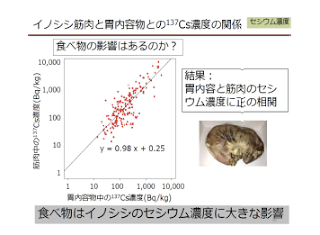 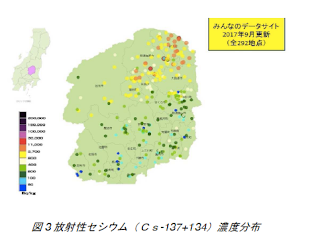 * On the other hand, Mr. Onuma will travel to various locations in Tochigi Prefecture with the results of this report for about a week from the end of October to November, and will hold a briefing session and a measurement workshop. On the day of the event, we will introduce the situation of radioactive contamination in Tochigi prefecture, together with the Tochigi briefing session.
2. Analysis report summary of soil survey in Yamagata Prefecture
(Amoro lab Murakami)


As a result of " MDS East Japan soil becquerel measurement project" by the hand of the citizen, the soil contamination map of 17 eastern Japan prefectures has been enhanced more and more. Though it was thought that there was almost no pollution in Yamagata and Niigata prefectures that are close to and in close proximity to Fukushima Prefecture, the obtained map shows that areas with low contamination levels are widely present in both prefectures. 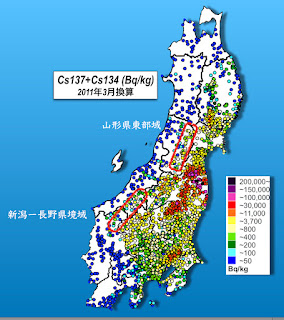 Even in areas where pollution on flat land is low, such as Yamagata Prefecture, “mountain pollution” continues as the test data of “Japanese horse mackerel”, “Yanasai (Kosibura)” and “Natural mushroom” continue, and “food standards exceeded” There is no end to the case.

3. Environmental concentration Becquerel measurement project
(Mr. SugarNat)
In the previous soil projects, we did not include measurements of hotspots to determine standard contamination levels in the area. However, micro hotspots (where radioactive materials gather and become highly concentrated) that are present everywhere are a big problem. In cooperation with the Hotspot Investigators for Truth, which has been working on the search, measurement, and decontamination of this hot spot for a long time, it has accumulated the data measured by them on the "everyone's data site" Started to
What points are likely to be hotspots using illustrations etc? It is displayed.
On the day, representative Sugar Nut will introduce the past measurement activities and the results of the government's efforts.

In the future, we plan to publish the results of analyzing more than 3,000 data from the "Soil Project," which we have been working with everyone, in the Atlas "Atlas," which is scheduled to be published in the future.

All themes are stories that can only be heard here.
Please come to the event from 9:30 on Sunday, 19th of November. 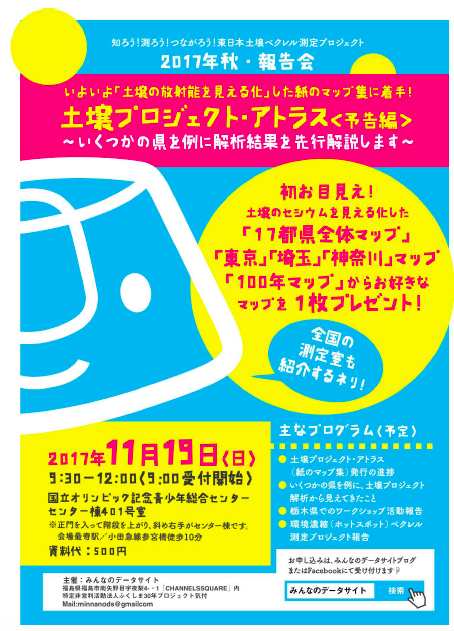 
It is an introduction of the following articles. 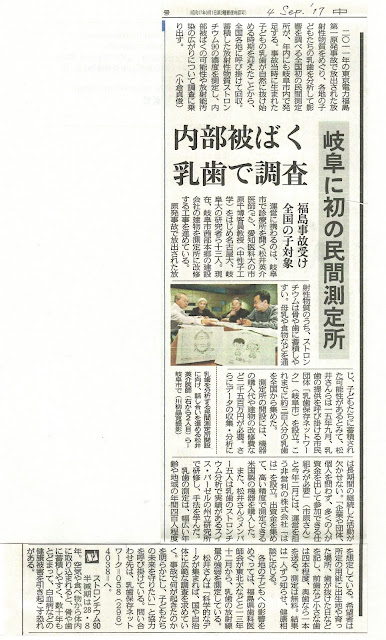 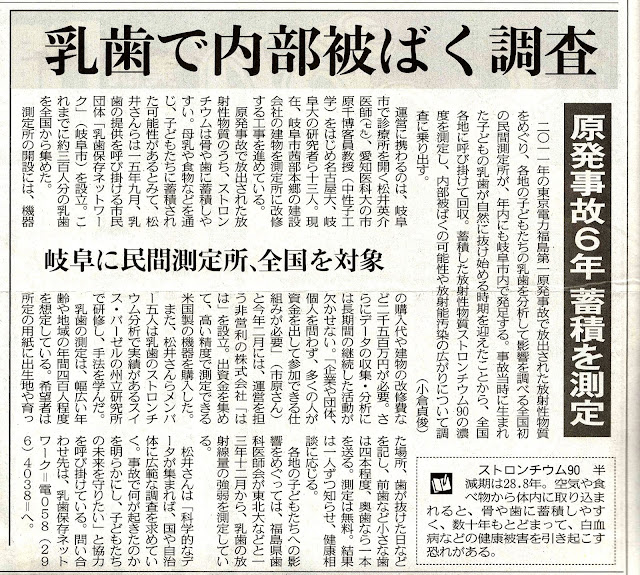 * Transcribe the text of the Chunichi Shimbun article.


2017. 9.17 Chugoku Shimbun morning paper page
Survey on internally exposed milk teeth
First private measuring station in Gifu
The country's first private measuring station will be launched in Gifu Prefecture by the end of the year by analyzing the milk teeth of children in various regions and examining the effects by examining radioactive materials released during the 2011 Tsurugi Fukushima Daiichi Nuclear Power Plant accident. At the time when the natural teeth of the child born at the time of the accident began to come off naturally, we called out and collected all over the country. Measure the concentration of the accumulated radioactive material Strontium 90 , and start investigation on the possibility of internal exposure and the spread of radioactive contamination. (Ogura Yoshitoshi)
Fukushima accident received children of the whole country
They are managed by Dr. Eisuke Matsui ( 79 ) who opens a clinic in Gifu City, Chihiro Ichihara visiting professor at Aichi Medical University (neutron engineering) and 13 researchers at Nagoya University and Gifu University . Currently, we are in the process of rebuilding the building of a construction company in Gifu City Ayabe Hongo to a measuring station.
Among radioactive substances released in the nuclear accident, strontium is likely to be accumulated in teeth and bones. Such as the through breast milk and food, was established to see that there is a possibility that has been accumulated in the children, Matsui et al., September 15, years, civil society organizations, which call for the provision of entrance examination "baby teeth save network" the (Gifu City). To date, about 300 milk teeth have been collected from around the country.
The establishment of the measuring station requires 25 million yen, including equipment purchase and building repair costs . Furthermore, long-term continuous activities are essential for data collection and analysis. "We need a system that allows a large number of people, regardless of companies, individuals and individuals, to take out funds and participate," (Mr. Ichihara) established in February this year a non-profit corporation "Haha" to handle operations. I raised my capital and bought a US-made crisis that can be measured with high accuracy.
In addition, Matsui et al. 'S five members trained at the state laboratory in Basel, Switzerland, which has a track record in strontium analysis of primary teeth, and learned methods.
The measurement of the milk tooth assumes about 400 people of a wide age and area a year . The applicant notes the place of birth, the place where he / she grew up, the day when he / she lost his teeth, etc. on a predetermined sheet of paper, and sends about 4 small teeth including the front teeth and 1 back tooth. Measurement is free. The results will be informed one by one, and health counseling will be provided.
On the impact on local children, from Fukushima Prefecture Dental Association is Tohoku University, such as the 13 December, measures the intensity of the radiation dose of baby teeth.
Mr. Matsui is calling for cooperation, "If scientific data are gathered, we will ask the national and local governments for extensive research. We will clarify what happened in the accident and protect the future of our children." For inquiries, please go to the Dental Tooth Conservation Network = 058 (296) 4038 .


● strontium 90 half-life of 28.8 years. If it is taken into the body from air or food, it will easily accumulate in bones and teeth, and it may last for several decades and cause health damage such as leukemia.