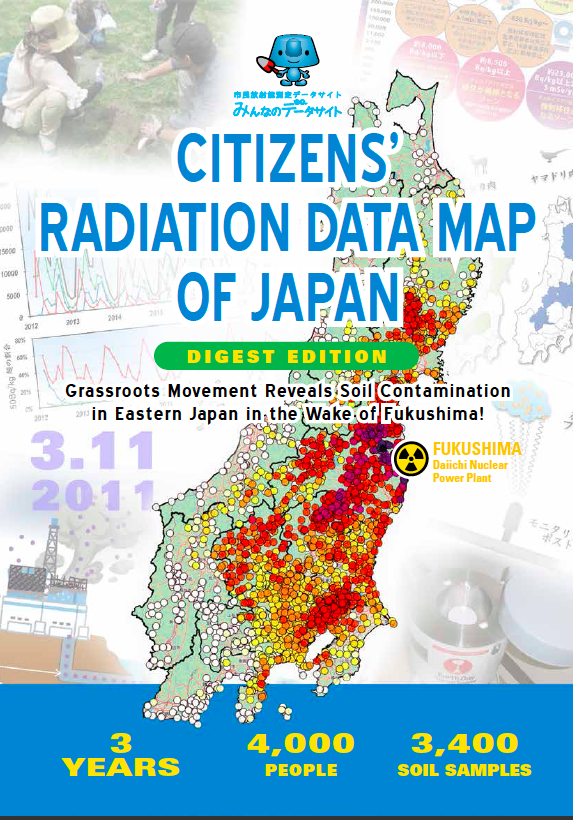 In bookstores in Japan, you can make a reservation with this ISBN, and it will be available after September 21st.

Other option will be added soon.

A Note about the Digest Version of the English Edition Booklet

In the aftermath of the accident, citizens around Japan began to question the Japanese government’s initial radiation exposure assessment, the scope of their radioactivity measuring, and their method of information disclosure.  With the aim of reducing citizen exposure to radiation, we established Minna-No Data Site, an independent nonprofit network of radioactivity-measuring laboratories, to conduct extensive soil measurements and release this information to the public.

More specifically, over a three-year period starting from October 2014, we measured the concentration of radioactivity (Cs-134 and Cs-137) in the soil (in Bq/kg) as part of the “East Japan Soil Becquerel Measuring Project” and publicized the results online as a collection of maps.


According to legislation enacted five years after the Chernobyl accident, Russia, Ukraine, and Belarus were responsible for measuring both air dosage (μSv/h) and soil concentration (Bq/㎡).
And using these measurements, the authorities were required to establish criteria for relocation and compensation.
The Chernobyl legislation guarantees relocation and recuperation rights to residents from areas where the exposure dose was estimated to be above 1 mSv/year.

In contrast, after the Fukushima Dai-ichi Nuclear Power Plant accident, soil measurements were more or less not conducted outside of Fukushima Prefecture, and the government has only published estimated numbers of the deposition amount of radioactive cesium and the air dose rate one meter above the ground.

The soil concentration figures released by the government are nothing more than estimates, and because the method of display was just an approximation, it is impossible to correctly ascertain the actual state of contamination in areas where citizens actually live.

In order to address this unsatisfactory state of affairs, we solicited the cooperation of citizens from around the country to help us carry out this soil measurement project in an attempt to fully grasp the total amount of radioactive fallout which fell on Eastern Japan (excluding Hokkaido) as a result of the triple meltdown at the TEPCO Fukushima Dai-ichi Nuclear Power Plant.

As a result of this investigation, we determined that the radioactive contamination was by no means limited to Fukushima Prefecture and that one hundred years from now there will still be several highly-contaminated areas where humans should not live.

Now, eight years after the accident, not only has the government yet to establish a criterion for radioactive concentration in the soil, but the authorities are continuing to enforce the policy of compelling people to return to their homes if the air dose rate goes below 20mSv/year.

Seen from the standpoint of international standards of public health and radiological protection we cannot turn a blind eye to this unacceptable situation.

With the Summer Olympics and Paralympics scheduled to be held in Tokyo in 2020, we decided to publish this booklet in order to respond to questions and concerns from people around the world about the current state of radiation contamination in Japan.

This book is a digest version of our bestselling Japanese book , Illustration: 17 Prefecture Radioactivity Map & Close Analysiswhich was self-published in November 2018, and was awarded the Japan Congress of Journalists Prize in July 2019.

With the publication of this English booklet we are hoping to inform people around the world about the actual amount of contamination in Japan, and at the same time, we are calling on the Japanese government to correct the following two problems:

With regards to the clearance rule for radioactive materials, prior to the Fukushima accident if the level of radioactivity was more than 100Bq/kg there was a strict storage obligation.

However, with regards to radioactive contaminants derived from the Fukushima Dai-ichi Nuclear Power Plant accident, the government is permitting anything less than 8000Bq/kg to be incinerated or disposed of as ordinary waste; an irresponsible policy which leads to the unnecessary spread of radioactive materials.

We are calling on the Japanese government to correct this double standard and are demanding a return to the pre-accident clearance level of 100Bq/kg.

Also, with regards to soil contamination, we are asking the government to not rely simply on the air radiation dose (Sieverts) as they have been doing up until now.  Instead, we are calling on them to guarantee appropriate rights of evacuation and compensation that meet international standards based on zone classification depending on the soil concentration of radioactive material.

◆Restoring the annual public dose limit from 20mSv to the pre-accident level of 1mSv a year.

The Japanese government has not yet cancelled the nuclear power accident state of emergency declaration, which was enacted on March, 11th, 2011.

Based on this declaration, the public dose limit was raised from 1mSv/year to 20mSv/year and the government is forcefully requiring evacuees to return to their homes in areas where the dose limit does not exceed 20mSv/year.

We are calling on the authorities to abolish the 20mSv standard repatriation policy and to return to the pre-accident public standard annual dose limit of 1mSv.