About correction of excess evaluation of cesium 134 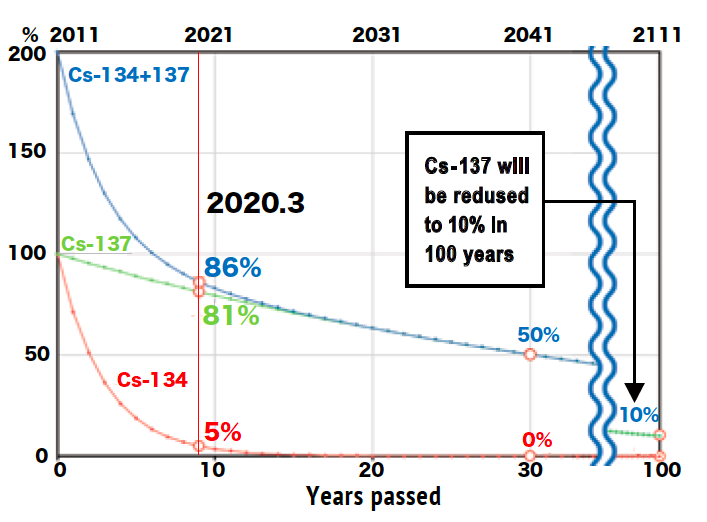 This is because NaI scintillation detectors that are used for measurement in many civil measurement rooms have inferior "resolution" compared to germanium semiconductor detectors, and they should be able to identify gamma (gamma) ray peaks in the near region with other nuclides Is a phenomenon that occurs because it is very difficult.
Because the area of cesium 134 (or cesium 137) and bismuth 214 (Bi-214) overlap, the measuring instrument estimates the numerical value by that much and emits the measurement result.

Foods rarely contain nuclide in the near region such as bismuth 214 and lead, so there is no such problem, but since there are various natural nuclide in the soil originally, many nuclide are contained. Such problems may occur in the case of contaminated soil. For such false detection data, after checking in each measuring room, the secretariat also checks and tries to enter data. The data on the map where the above tendency is seen is described as “Soil ratio corrected sample” and the values are corrected.

Please contact the secretariat if you find any soil data that has not been checked.

Effort to measure soil as accurately as possible with NaI scintillator

In the “East Japan Soil Becquerel Measurement Project”, we are collecting and measuring various places from the place where there is almost no radioactive material to the place where contamination is high which is the target of evacuation. For this reason, it is necessary to confirm that both extremely low cesium level samples and extremely high cesium level samples can be measured with a certain degree of accuracy.

At the Data Site, we received a subsidy from Takagi Jinsaburo Citizen Science Foundation in 2016, to improve the accuracy and verification of radioactive cesium concentration in soil with NaI scintillator.

In this project, we made efforts to create a soil sample with very low radioactive cesium concentration and a soil sample with high cesium concentration by ourselves, fill it in the container decided for each maker of the measuring device, and measure them at each  measurement room. Then, it was confirmed whether there was a difference in the measured values, and the instrument characteristics were determined, and verification was conducted to derive whether a correction factor and what kind of correction would be necessary.

Based on this result, we examine what is subject to numerical correction, and the current numerical value is already corrected.
(They are not the major correction that could changes the color of the map)

2. Check the half width

Many measuring rooms have acquired measuring instruments and started up in 2012, and as the activity has progressed over several years, it is also necessary to check the accuracy over time. Therefore, we implemented the “Let's check value half-width project” in 2017.

Half-width measurement is one of the most basic tests to test the performance of a gamma-ray instrument.
By measuring the radioactive coin wire source and examining the shape (sharpness / fineness) of the peak at the time of measurement, how well the detector has the ability (resolution) to separate the target peak from other peaks You can check it. In other words, the sharper the shape of the peak, the more it can be calculated as an independent peak without hitting the next peak.

The sharpness of the peak gradually becomes smaller and wider as the detector ages. Therefore, even if it is good at the time of purchase, in the case of measurement using a detector that has deteriorated over time, the peaks of other nuclides may be mistakenly detected as the target peak. In particular, since the above-mentioned confusion with the natural nuclide (Bismuth 214) in cesium 134 and the like can sometimes cause serious problems, the accuracy of the measuring instrument is also confirmed in this project.

* In the 2017 survey, no data showing noticeable deterioration was found in any of the measuring instruments.

We make map by inputting record of field book data which we got from all of you in system, but collection point appears in "sea" or "other prefectures" because of mistake in writing It may shift. For this reason, double check of the data site participation measurement room and secretariat of everyone who performs registration checks whether there is an error in the address and the latitude and longitude.